Recently VisionOne VC shared their Fund I performance with $15m raised in 2012, deployed in 2.5 years into 20 startups, measured in return multiples as of June 30, 2019. You may check out their blog post for more details and see their chart listed below – it clearly illustrates how “power law” returns work in Venture Capital. 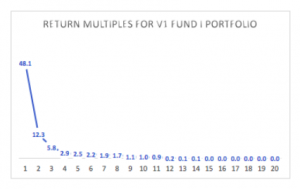 I may one day publish Zillionize’s performance as well but since we are a single LP evergreen fund, we don’t really check the paper valuations and calculate IRRs as often as most other funds do for reporting requirements. In other words, we know our outstanding fund performance “by heart”, and are very patient on this journey for the long term with all the wonderful founders we’ve backed since the beginning.

So for now, I’ll list a few featured portfolio startups below based on their funding size (all public info) or ARR (no specific numbers shared here for obvious reasons), which doesn’t necessarily correlate with a startup’s paper valuation due to (lack of) funding or exit events like acquisition or IPO. You may also visit my AngelList.